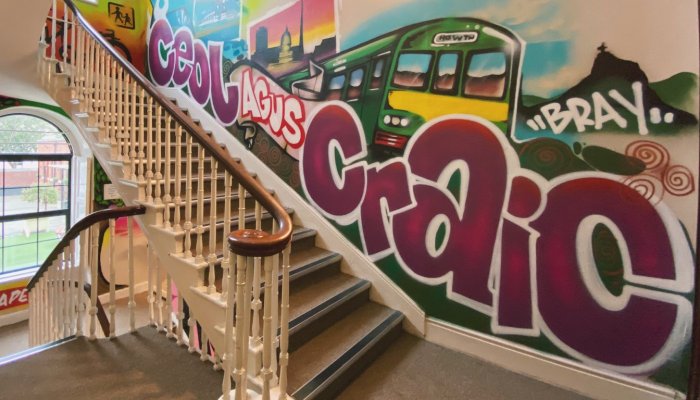 When visiting Ireland you will quickly notice how locals here have a unique way of communicating, and specific expressions they use often. Irish people have included many slangs in their vocabulary. With time these sayings have become symbols of their culture, sometimes even mixing the English language with the Gaelic Irish idiom. Here is a list of 10 common expressions used by people living in Ireland, and what they mean:

That’s a saying you will hear frequently when visiting Ireland and that can cause some awkwardness at first, since “craic” is many times mistaken for “crack”. However, both words couldn't have a more different meaning. “Craic” means “fun” in the Irish language, and when someone asks you “what is the craic?” they are simply trying to ask how are you doing, or what has been up to you. Friends will use it when seeing each other after some time, or it’s also a way to start a conversation in a coffee shop or pub around the country.

This expression is used to say someone is being “silly” or “acting like crazy”. You will hear Irish citizens using this saying when their friends have had a bit too much to drink and start being nasty, or when an app on their phone is not working properly, as some examples. It is basically a funny and very Irish way to say something or someone is being a fool.

It’s not uncommon to finish a conversation with an Irish person using the expression “sure look”, which is another way to say “it is what it is”. This is a widely used phrase in Ireland and one you will surely hear as soon as you arrive in the country. It is also a good way to answer a friend when you don’t know what else to say about a situation they shared with you during a conversation, “Sure look, what can you do?”.

“Grand” and “not too bad”  is two of the most iconic Irish expressions, and are very present in people’s vocabulary around the country. When in Ireland, answering the “how are you?” with a simple “I’m good” is not good enough, you will probably get a “what happened?” as a reply. To make sure your friends understand that you are, indeed, feeling good and happy, you can answer with “I’m grand”, or “I’m not too bad myself, how are you?”.

“Gas” is the Irish word for “funny” and has been introduced to the daily vocabulary of the Irish people. You can use this slang to refer to a fun person or situation, such as “Emma is a gas woman”, or “Look at Sean’s dog running around like crazy, that’s gas”.

When talking to an Irish person it is not unusual to hear them calling any third person “yer man”. It can cause some confusion at first, what man? I don’t have a man?! But it is just an expression used to refer to a random person, or when they don’t know the name of the person they are talking about, “I talked to yer man yesterday in the coffee shop”. The expression can also be “your one”, or “your one on TV was saying it will rain tomorrow”, when talking about the news presenter, for example.

This is the Irish word for “cheers”, and is used the same way when incorporated into the English vocabulary. Irish people will also toast with their pints saying “Sláinte!”.

Irish people will often thank for a service or a nice gesture using “thanks a million” or "thanks a mil", which means thank you very much. When buying groceries or exiting the Dublin bus, remember to tell the employees working on this service a “Cheers! Thanks a million”.

That's how the Irish refer to kissing someone at a party, or when you are still in the early stages of dating someone. It’s a funny expression that has become very popular around Ireland, especially among younger crowds. “Matt shift Anna at the party last night!”, is a way of including this expression in your vocabulary.

The expression “in bits” is used by Irish people when something or someone is in a bad form. If your stomach is not feeling the best, for example, you can say it is “in bits”. It also works to refer to your own mood “this is such a bad day, I’m in bits”, or when a place is looking bad, “the kitchen was in bits after the party”.

Now you know the most used Irish phrases and expressions to try when visiting Ireland!

We cannot wait to have you here :)

www.canbe.ie/blog.html/irish-sayings-and-expressions
BACK
LIST
NEXT
Book Your Stay
Check in
03
12
2022
Why Book With Us?